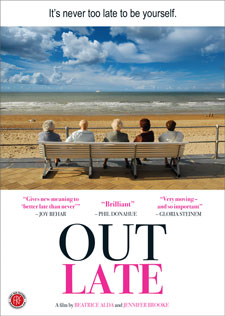 Out Late (First Run Features) is an inspirational and moving documentary about five individuals who made the courageous and life altering decision to “come out” as senior citizens. Their stories are nothing less than extraordinary: many lived straight lives complete with marriage and children, and now face the challenge of beginning again late in life. Why did they wait until their 50’s, 60’s, or 70’s to come out? And what was the turning point that caused each of them to openly declare their sexuality? From Canada to Florida, to Kansas, we explore what ultimately led these dynamic individuals to make the liberating choice to live openly and honestly amongst their family, friends and community…perhaps for the first time in their lives.

“This film is very very moving–and so important.” – Gloria Steinem

“I predict a straight audience will be attracted to this brilliant work, be instructed by it and recommend it to friends. I predict the GLBT folk will want this film to live forever!” – Phil Donahue

“Gives new meaning to ‘better late than never.’ A valuable film that could encourage young gays to live their lives without fear and secrets.” – Joy Behar, Host of “The Joy Behar Show”, Co-Host of “The View”

“Out Late is a powerful documentary that reveals emotional, untold stories from a formerly silent generation. It’s a liberating experience watching this well made film, for it teaches us that it’s never too late to seize the day and live your life to its fullest.” – Lauren Lazin, Executive Producer and Director, MTV Networks

“Depicts both the rush involved in claiming one’s sexual identity and the fear that having waited so long might make real romance impossible.” – Boston Globe

“Out Late’ is an engaging testimonial to the power and patience of love, for oneself and others; a great little film which crosses boundaries and appeals to any person who enjoys touching stories of truth and self-love eventually persevering.” – Ellen D., Toronto, ON

“I felt relieved for the people who had come late to an understanding that their sexual preference was no barrier to what we call normal life. It’s wonderful to watch these brave seniors embrace their reality and try to live large in the world.” – Bill M., Founder Toronto International Film Festival

“I saw your INCREDIBLE documentary at the Female Eye Film Festival. Truly one of the most moving film experiences I have ever had. I have been out since I was 17 and never has any set of stories made me so grateful to myself and to the small kingdom I lived in that let me be me. I really, really wish this film could be shown in seniors’ residences but also, in high schools across North America, because one of the most powerful things you come away with after watching your gorgeous movie is not just about being gay or not, but rather, the vital importance of being true to yourself as soon as possible. If that means following a career passion even when parents want something else, or loving whomever your heart wants to love, it is ESSENTIAL that we teach youth to live authentic lives. Thank you so much for your brave, dogged and sensitive work in film.” – Marnie W., Prince Edward Country, Ontario